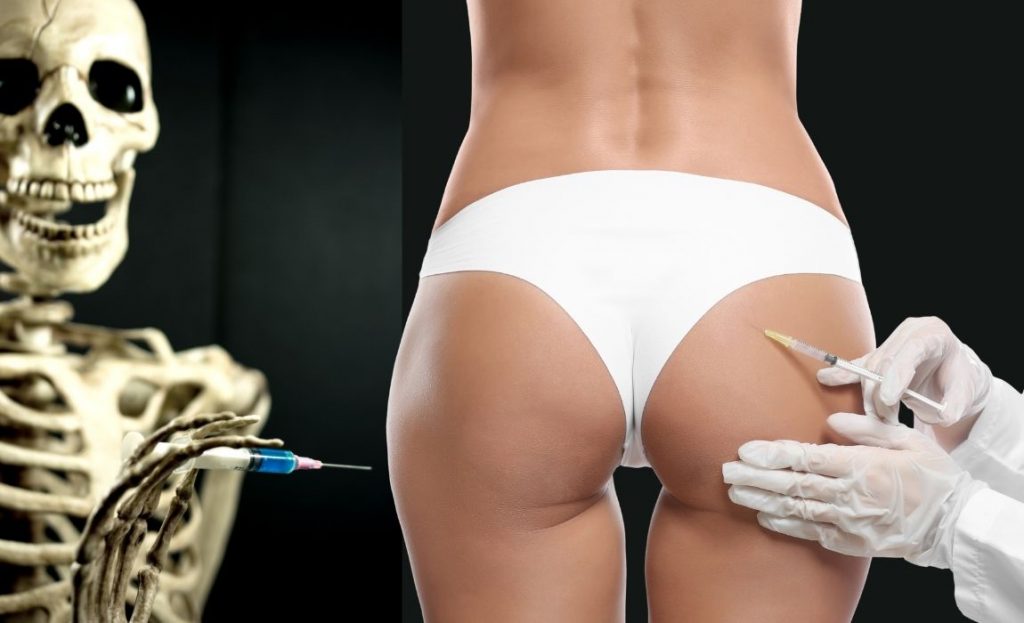 It has all the makings of a highly-acclaimed docudrama…celebrity, utter shock…and death.  And to think the story revolves around body contouring, butt sculpt injections specifically.

After the news became public, nearly as many as 100 people have come forward claiming they or a loved one have been harmed, according to LAPD Deputy Chief Alan Hamilton.

We’re providing the highlights below.

It seems a socially-connected mother daughter team well-known in the Hollywood party circuits had been performing illegal butt sculpt injections using silicone to enhance buttocks, an illegal version of the Brazilian Butt Lift (BBL) procedure, for many years.   Neither the mother or the daughter were physicians or medically trained.  Recently, one of their ‘procedures’ killed a young 26 year old Los Angeles woman named Karissa.  The Rolling Stone article tells the story.

A Brazilian Butt Lift (BBL) involves the injecting of fat, removed by liposuction elsewhere from the patient’s body, and into the buttocks. Even if done legally by a physician, the BBL procedure comes with high risks. The Rolling Stone article provides these statistics:  (1) three percent of surgeons performing the procedure have had at least one patient die from it, and (2) 1 in 3000 undergoing the procedure will die.

The gravest risk of injecting the buttocks with anything is that the material could possibly enter the bloodstream via a large vessel in the buttocks.  If this happens, the material can travel through the vessel to the heart, lungs, or brain…and then lead to stroke, heart attack or death.

It is illegal to inject silicone into the buttocks, but it gets worse.  Sometimes other substances like caulk and motor oil are used in these illegal procedures.

Why is this an easy opportunity for criminals?  Even though non-surgical butt enhancement treatments are available, many people won’t settle for ‘less than dramatic’ results provided by surgical procedures.

But the problem is they can’t afford the surgical procedure by a qualified physician.  So instead, they seek out illegal means, butt sculpt injections.  And these illegal procedures often end with bad, or even deadly outcomes.

Back to the murder charges in LA.  Investigators believe the two women had been running a huge criminal operation, at least on a national level, maybe even internationally.  Law enforcement officials have verified victims in other states, and they are working to verify victims in foreign countries as well.

After the Rolling Stone article was released, several people reached out to LAPD and told their stories, stating that they had remained silent for years for fear of reprisal.  The investigation is ongoing and the full impact has yet to be seen.

Don’t miss the latest in body contouring Industry News!  Sign up to receive our Stay in the Know Bulletins below.